Tracy Moseley’s Blog: The rise of the eBike

The year 2020 will forever be in the history books, but for more than just Covid-19. It was also the year that the first ever eBike Enduro World Series race took place (EWS-E). Hosting a first EWS-E during a global pandemic was certainly not in the plans of Chris Ball and his team, as I know that the inclusion of eBikes had been evolving in his thoughts as a new enduro discipline for several years prior to its arrival.

For me, seven years after the first ever EWS, I found myself back on the world stage…but this time with a motor inside my Trek bike! Lots has changed for me in the past 7 years; I won the first 3 years of the EWS (2013-2015), then retired in 2016,  had a baby in 2018, started working for Trek Bikes in an athlete management role 2019 and in 2020 tried to combine that with a few eBike races. It’s been a busy few years!

Racing at the top level again was never something I had planned to do and still don’t, as I had spent 15 years living a selfish, focused athlete life and at the age of 40+, I am enjoying the life-changing role as a mum to my son, Toby. But inside me there is still a little competitive fire burning and the thought of getting back between the tapes was too appealing to decline when Trek asked me if I would consider racing the inaugural EWS-E races.

So in August 2020 I found myself flying out to take part in the first ever EWS-E race in Zermatt, Switzerland. With so much uncertainty surrounding racing (and life in general) due to the pandemic, I had tried to implement some sort of training plan – but with my Trek work and a 2 year-old, I really only had about 1.5hrs first thing in the mornings to try and get some bike riding done. I committed to three months of training ahead of the first race and felt like I had regained a bit of fitness – but I really had focused on fitness and had little eBike riding time in my body. I know that sounds strange, but there are some differences regarding riding style and strength.

With Zermatt being the first race I was soon to have a rude awakening to riding in the big mountains and steep alpine singletracks again after a year of riding my local 200m hill!

With this being the first race I really did not know what to expect. We had three loops to practice and then the race was the following day. My initial reaction was one of disappointment as I felt like we should have been doing epic loops in the mountains, but with fairness at the forefront of the racing, the loops had to be short enough so that all battery sizes could make it around the course. We were also restricted to what trails we could use for the race. The access of race medics also needed to be considered along with shared trails etc – these are all things race organisers must take into consideration when running a bike race.

What I did really enjoy was the inclusion of an uphill timed stage. This was new to everyone and although it was only around 1m30s long, it was an intense, painful, nerve-racking part of the race and I loved its addition to the race concept. I also enjoyed the tight liaison times between race stages and was glad I had done some training to be able to make it around and actually enjoy the race! What I wasn’t prepared for was the upper body strength needed for racing an eBike down long, steep trails. I had so done very little in the way of bike setup and suspension tuning compared to what I would have done in the ‘old’ days, and I soon got a sharp reminder of how important that is when trying to compete at the top level! By the end of the day I was very much a passenger on my bike just hanging on to make it to the finish line. I managed to somehow win the uphill ‘Power Stage’, but I was well beaten overall by Melaine Pugin who showed me how fast you should be riding your bike down the trails when she caught and passed me on the last stage of the day!   2ndplace was still a big achievement for me though, as my feeling on the bike was far from perfect. Huge congratulations to Melaine, who thoroughly deserved the win   I travelled home and had around a month to improve before the final race of the year. Sadly there were only two races in 2020, but it was still great just to be able to race amidst the chaos in the world and I felt incredibly lucky to have been able to race them.

The second race was in Pietra Ligure – a new venue for me but one just next door to Finale Ligure; the famous MTB destination where I had raced countless times over the last ten years. The race format in Pietra was similar to Zermatt, but this time the three loops were all quite different and we didn’t repeat many trails. We also had two uphill power stages and the trails were shorter and not as steep; much better for an out of shape & strength Tracy!  I had been trying to ride my eBike a little more at home in the 4 weeks between the races and thankfully felt a little more comfortable this time around. I didn’t have the same challenge of competing against EWS racers this time as their race was the same weekend, so most opted to rest before their main EWS race. This gave me more of a chance to get a good result, and I managed to take the win in a small women’s field. I really enjoyed getting to grips with this new discipline and was ready for more, but sadly that was the end of the season.

My take home points from this short season was that I needed to get stronger and spend some more time setting up my bike and its suspension. And then ultimately more time riding my eBike to prepare!

Fast forward to a few months away from the start of the 2021 season and this year we should have a 3-round series, all in Europe: Italy, Switzerland and then Scotland in September 2021.

I’ve managed to spend a little more time in the gym just focusing on some general upper body strength and have already done one suspension setup day, so I already feel a little more prepared for the races later this season. My bike for the season is ready and now I just need to find some time to ride it fast!

My race bike for this year is a Trek Rail (size Medium), equipped with: 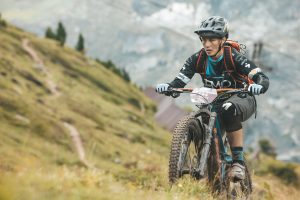 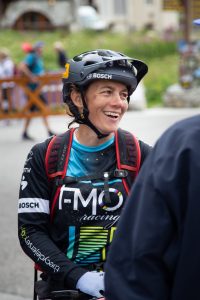 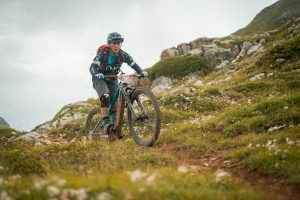 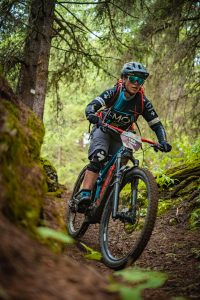 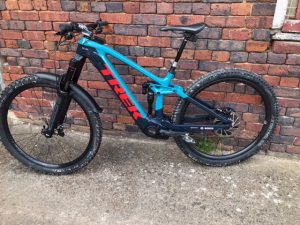 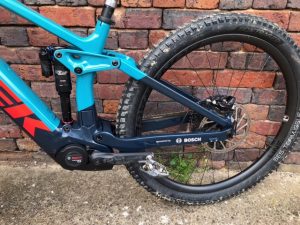 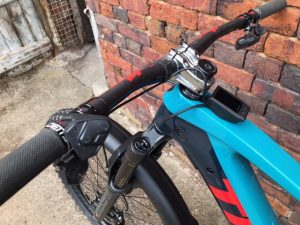