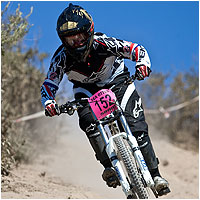 One of the advantages of flying so much is that I get to accumulate quite a few airmiles over the year and I decided to use some of them and upgraded on my flight from London to San Francisco. What a joy that was. It makes the whole flying experience so much more bearable when you have edible food, that you can eat with proper cutlery with space to actually move your arms well enough to feed yourself and a seat that turns into a flat bed. It was luxury !!
However I still arrived at Sea Otter feeling pretty tired after the last couple of weeks of travel. Not only did my body have some sleep deprivation it also had to adjust from a hot humid 30 degrees, to a freezing windy 10 degrees ! For the first 3 days we were there it was freezing and so windy it made riding back from the race venue one night quite a challenge just to stay on my side of the road ! Thankfully the weather only got better and we were basking in hot sun by the weekend.

Sea Otter is as much a festival as a race, as the downhill course has been the same terrible track for years ! Another weekend of pedalling and jumps, just this time it felt easy as it was half the length of South Africa ! It 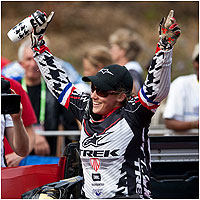 By Wednesday the pits had transformed into a World Cup site and riders were beginning to show up. It was great to have been here for a week already as I was already used to the humidity and I had already ridden the track so I was able to conserve some energy during the run up to the race. They made a few alterations to the track from the national, just adding an extra line at the top and putting in a few extra corners and lines here and there, otherwise it was pretty much the same.

Practice took place on Thursday and by Thursday afternoon it was already time for timed practice. This year the world cup schedule has been changed slightly and we now qualify the day before the race, and just have one race run on the Sunday. For this race it was actually qualifying on Friday, so you had to be up to speed pretty quick.

I worked on a few sections that I hadn 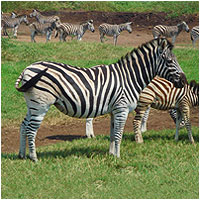 A drive to Heathrow marks the start of my long haul travelling for this season. This year 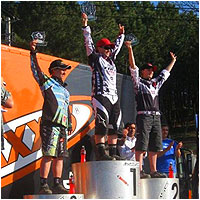 Gouveia is quite often the first big race of the year, a warm up for the world cups. It 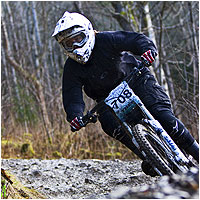 Spending the winter in the UK this year was a decision I made to make sure I rode downhill in more unpleasant, muddy technical conditions ! It certainly seemed to be working as every downhill day I have done over the winter I have been using my mud tyres !!

I took the opportunity to spend a week in Innerleithen before the first winter race, to do an uplift weekend and then spend the week training ahead of the first race. Glentress and Innerleithen are such great places to ride as I was able to do some xc, dh, some road riding and go to the gym all within a 10 minute drive. We also had a pretty good week of weather which made the riding even better. This was to be my first real outing on my new Trek Session 88. I felt really good on the bike and I was looking forward to see how fast I was actually going on it ! I was amazed how many other Trek bikes there were at the race, they certainly seem to be a popular bike this year. The race weekend was bitterly cold, but the snow managed to hold off and the track was pretty dry. As with all Innerleithen tracks it was tight and twisty through the trees with a few new sections which are always challenging as they wear in throughout the weekend. I had a good race and took the win ahead of Katy Curd. I was also pretty happy with my time as it placed me just outside the top 10 overall which was good.

Although the two races were a few weeks apart, I seemed to be back up at Innerleithen again within no time. This time it was a different track, a bit longer and a lot more technical. The weather was also not as kind and the damp conditions made the top section very challenging. I really enjoyed the track and the tough conditions. I had some more competition this weekend and I knew the slippery track would be hard to get together a perfect run. However I was really pleased with how I rode to take 1st place ahead of Helen Gaskell.

It felt great to get a couple of races under my belt and really good to be riding in some hard conditions. Trek were sponsoring the event and supported me really well, so I was happy to start of the year with a win for them.

Next stop will be the first time we all get together as one team, Trek World Racing at the Maxxis Cup in Portugal and get chance to wear our new team kit !