I last raced the US National Series back in 2003 when it was in the good old days of the NORBA series. Since then the series fell to bits and the racing scene in the US lost its international appeal. The launch of the Pro Gravity tour is an attempt to rekindle the success of the NORBA and create a successful, attractive and competitive series across in the US again. With Trek being an American company they were keen for us to race a little more in the US and help support the series. The first stop was up in the North West, in Washington State. As soon as I landed at Seattle I felt more at home as it was green with trees and grass, a sure sign that it rains a bit more here than in any of the places I have been over the last two weeks. Port Angeles is a tiny little town nestled on a peninsula west of Seattle, it actually not that far from Vancouver and just a short ferry trip from Vancouver island. There was an obvious thriving race scene here as the volunteers and trails in the forest were amazing. We were made so welcome and the organisers were really excited for us to be there. Due to the volcano erupting and flights stopping for a few days a few other teams decide to stay on another week after Sea Otter and do this race aswell, so it really made for a big race, a mini pre world cup event !

The atmosphere was great, really laid back and with the quickest turn around of the uplift and endless practice it made for some great riding and downhill training ! I probably did about 20 runs over the weekend !! The track was great fun, the first proper downhill track I had ridden on my new bike this year and it felt great.

I had fun following the boys on my team down and trying to keep them in sight. The practice was split in pro and non pro, so whenever we were practicing there was always a great crowd making some noise during practice. I seeded 1st just ahead of Rachel Atherton and Jill Kitner who is making the switch from 4x to DH this year. After this weekend 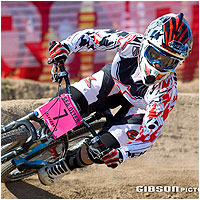 The Sea Otter Classic takes place in the grounds of the famous Laguna Seca Raceway and is always a massive festival as much as a bike race. Its a great opportunity to meet many of the teams sponsors and allow tonnes of public to see the pro 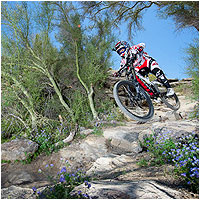 The season has now officially begun as I packed my bags and boarded my first long haul flight of the year ! This time my quest for sunshine was well and truly achieved as I stepped off the plane into a nice 25 degrees at 6pm at night !! It is the Trek team camp and the opportunity to all get together as a team for the first time this year, for team photos, the collection of this year

This weekend it was a nice local race, only about an hour from my house, so a leisurely drive up on the Friday afternoon was the plan. It was a leisurely drive up until I tried getting the campervan into a very wet finish field !! Well and truly stuck I then had to get towed in to the field and to a parking place by Dave Pearce and his tractor ! I was pretty pleased that as soon as we had got settled I looked up only to see the next person get stuck and the tractor was needed once again !! The joys of MTB racing in the UK !
Pearce Cycles is a shop in Ludlow who have run races and events for years and years. They are such an enthusiastic couple that have done so much for the support in my area I wanted to support their first race as I was home and had a free weekend.

I managed to walk most of the track before it got really too dark to see anything. It was a very normal Bringewood track, tight in and out of the trees on a very worn almost luge like track ! It was however so slippery it was pretty hard to stay upright on your feet, I had no idea what it would be like on a bike in the morning !

Saturday morning came and with quite a lot of rain overnight I decided to cut some spikes tyres. They were definitely needed as the first couple of runs were so slippery. Throughout the day it began to dry up very slowly and it became a lot more predictable. Race day came and we still had not had any rain so I decided to put some dry tyres on. I did a run but still felt like I could do with the security of the spikes, so swapped back for the race. Both of my race runs went ok, I was not very well warmed up and really felt it after the really hard pedal through the mud at the start. I recovered ok and rode the bottom of the track really well. It was a physically hard track as the mud really slowed you down and you had to work really hard everywhere to maintain your speed. I finished with my fastest time of 2.39min, 10secs ahead of French World Cup rider Myriam Nicole, with Jess Stone, only a few seconds back from Myriam in 3rd place. I was pretty pleased with my riding at this stage in the season. I would have liked to be a bit closer to the winning men 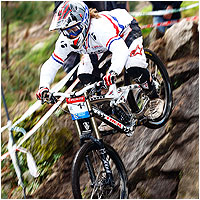 Vigo has been a stop on the world cup circuit and for the last few years a round of the Maxxis cup series. This year it was an independent event, with full UCI points and good prize money. I had been looking forward to this race since Christmas as its right by the beach, great track and always lovely and sunny. I just couldn 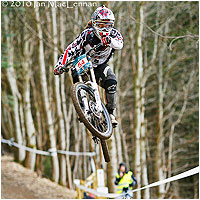 Here we go again another race season about to kick off. It always amazes me how fast the winter