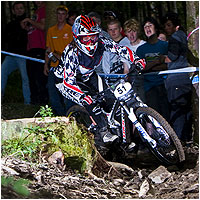 After the disappointment in Maribor I decided to use my free weekends at home and race a few local races. The lovely July weather turned up every weekend and rained as soon as I set off for a race, so I had some pretty good mud riding practice which would come into good use for the National Champs as we had some pretty heavy downpours during the weekend at Innerleithen.

The track for the National Champs was a really good mix of the all the trails they have on the hillside. Some old school flat out sections and some more steep tight technical stuff, I really liked the mix and was having fun in practice. With Cross Country on during the same weekend there was a lot of people around and a pretty good atmosphere over the weekend. I had a solid qualifying run, and would start off as the last rider down the hill. By the time the final runs came around I was back on the dry tyres which rolled a lot better on the top half of the track. I made a few little mistakes on the way down but still went 6 secs faster than in qualifying which was enough to take the win and my 7th National Downhill Title, ahead of Helen Gaskell in 2nd and Jess Stone in 3rd.

Now back to world cup racing where I hope to be back on the podium and riding well.