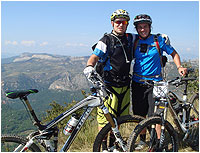 The Transprovence race is now in its 3rd year but I only found out about it during the Urge event I did in Cabo Verde back in February when I spoke to Mark Weir and Jerome Clementz as they were signed up to do it. I emailed the organiser when I got home and managed to get the last two of the 50 spots available. It was going to be our end of season holiday for myself and my boyfriend James ! As James has spent most of the year watching me race it was going to be a chance for us both to race and take part in adventure together. The concept of the event was amazing, 7 days of riding from Gap to Monaco with 10,000m of climbing and 15,000m of descending and during the course of the week there are 24 timed stages which were meant to be predominantly downhill…..but we soon found out that Ash the organiser loves the climbs and even more the hike a bike carry sections !! It was going to be the most unrelaxing holiday we could have chosen !!

The journey started with a transfer from Nice up to the start just outside Gap. Having to pack just one bag with all the kit and spares you might need for the week ahead, your sleeping bag and pillow was already the first challenge for me ! Once packed we then had a 4hr drive up to the start through some of the most beautiful scenery but also one of the most windy roads ever. I had the back seat which was a bad choice for any feelings of car sickness ! Once we made it we entered the campsite and found our tents which would be our home for the next 8 nights ! Having done a similar type of event earlier in the year at the Cape Epic this was so different in the fact that there were 58 riders and around 30 staff compared to over 1500 people at the epic. Camps at the TP really had a family feel and super social nature. Pretty much as soon as we arrived it was dinner time and the food that came out of an outside camp stove kitchen was just amazing. We ate so well all week it really was 5* camping. The following day we had a free day in which we sorted out all our stuff, the boys all talked rubbish and tried to mess each other