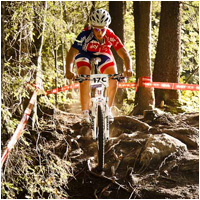 The World Championships in Champery were always going to be an interesting one as the downhill and cross country courses are some of the most technical of the whole race circuit and in previous years the weather has always played a big part in the event ! This year was to be no exception !

This year at the world championships I was going to be taking part not only in the downhill but also in the XC team relay ! I have really enjoyed my exploits into xc racing this year and the added fitness that it has brought to my downhill has been noticeable too. The Champery xc course is one of the most technical tracks I had seen and I was chosen to ride just one lap of the track alongside 3 other GB team mates in the Team Relay event. It sounds easy just to do 1 lap of around 15 mins but I soon found out that it was far from easy ! A maximal effort in a stage such as the world champs where the adrenaline is flowing created an effort that I never recovered from right from the start ! I went so hard that I never managed to regain my composure and suffered for the 17mins it took me to complete my one lap ! I gave it my best shot, but just never expected it to hurt so much for the entire duration. However my efforts helped the GB team to a 9th place finish which was a good points scoring result for them. For me it was an unpleasant experience but one that I really felt helped unite the XC and DH communities as so many downhill riders came out to watch me suffer !!