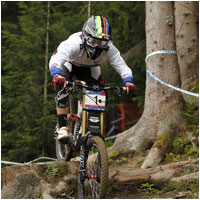 Recovery from Fort William took a few days as I think both mentally and physically that weekend is a big drain on your energy levels !! After a short day and a half at home of pretty much just washing, doing emails and cleaning out the campervan it was time to pack up again, set the alarm and be off to the airport at 5am ! I did have chance to quickly check the weather and the forecast was not great, rain all week. So when I landed in Salzburg on Wednesday afternoon I was not surprised for it to be pouring with the rain. However on the short drive to Leogang the sun came out and things looked good.

Thursday we also had a pretty good day and we walked the track to find some new changes from last year. They had done a lot of work to build berms in all the places where there was an awkward flat turn or ledge so it looked as though the racing would be much faster and a little easier than last year. However the weather would be changeable all weekend raining mostly during the evening and then drying up gradually throughout the day. I struggled to get into the course on Friday and took a while to build up the confidence on some of the jumps. I had done them all by the end of the day and felt better but just didn